In 1920 the first Venture club was formed in Bristol with a motto of “Looking Further” the purpose defined as:

The purpose of the Venture Clubs is very much in line with the purpose of Soroptimists, however neither organisation was at this time , aware of the other’s existence. 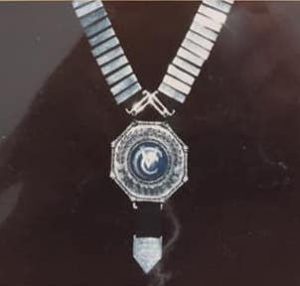 In 1927 Croydon Venture Club was formed, you will see the V for Venture on the Insignia. They were followed by Coventry in 1928, which was also the year the Association of Venture Clubs  was formed. At this time there were now 10 extant Venture Clubs.

Marion Reid is writing a comprehensive history of the Bristol Venture/Soroptimist Club to celebrate 100 years in 2020 she says: 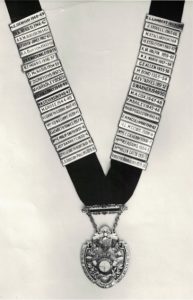 As SI Bristol approaches its 100thyear, a book to celebrate this mile stone will be published. Researching archives for information for a book on the history of SI Bristol has revealed an interesting photograph and information that is pertinent to SIGBI and to the insignia that is displayed at No 63 Bayswater Road. 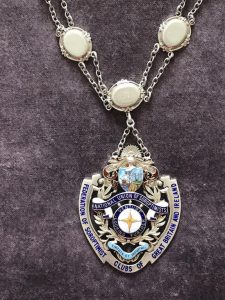 The names of the various Presidents, up to 1969, are clear on the bars on the ribbon of the insignia (see photograph). In 2006, the insignia was deemed too fragile for repair and it is now mounted in the entrance hall at No 63 Bayswater Road.  This ‘retired’ Federation insignia was given in January 2007 to Barbara Evamy (Past Chair of No. 63) by Past Federation President Ann Dawson for safe keeping at No. 63. From 2006 to date, the President of SIGBI wears a replica of the insignia.