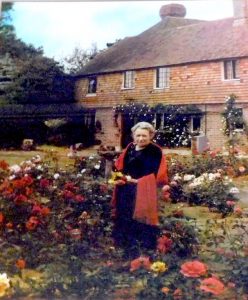 “My education in England has given me fluency in several languages and this was a great help in my International work. I was a member of Greater London Club and when I attended the Atlantic City convention I was very honoured to be elected as the first International Liaison Secretary.

What a challenging experience! But little did I know that I would have to hold the office for 10 years because of World War 11

Throughout WW11 I remained in London. Soroptimists from all over the world visited me, bringing a spirit of hope, cheer and goodwill. Hundreds of parcels reached me despite torpedoed ships, damaged ports, bombed railways and battered Post Officers. I spent every weekend opening and distributing these parcels to the needy, always helped by Soroptimists.

My main concern was to hold our three Soroptimists Federations together. It was a difficult task. In many countries citizens were deprived of all normal human rights, forbidden the freedom of opinion, of speech and of meeting. Correspondence was censored, conversations overheard, and it was almost impossible to trust anyone. I remember Dr. Madelaine Garot, the President of the European Federation, saying that she had to hide all papers and Minutes of the Federation under the coal. I sent her a Red Cross telegram saying only “Workinghard and hopeful” and she told me later it meant a great deal to know that European Soroptimists were not forgotten and that it inspired them to hold on”

Elizabeth was a Founder Member of SI Central London, chartered in 1924. She was responsible for the organisation and formation of many new clubs. She worked With Edith Glanville to expand Soroptimist International into Australia.

In 1939  she had for 12 months been establishing the post of International Liaison Officer, reminded British Soroptimists that it was essential to keep faithfully to the policy laid down in the International Constitution of maintaining strict neutrality in all national affairs and of avoiding all discussions on political, sectarian-religious and racial questions.

As the storm clouds gathered in 1939, the British Federation of Soroptimists embarked on rescuing members of the Vienna Club and their families, who were threatened by the Nazi regime. Negotiations took place with the Home Office and since each person had to be sponsored by someone in England, Elizabeth Hawes did much of the work. Eventually over 30 refugees arrived in England. Under Elizabeth’s leadership Soroptimists made themselves responsible for the refugees and subsequently arranged their safe passage to the United States where these brave and harassed women were helped by American Soroptimists.

How Elizabeth Hawes managed to maintain contacts with Soroptimists in Occupied Europe no-one will ever know for certain, but it is certain that she had her own “underground network” of brave women throughout Europe during those dark and dangerous days.

Honorary Membership of the Federation of Great Britain and Ireland was bestowed on Elizabeth  in 1948. As a token of appreciation of her work as Liaison Officer for Soroptimist during the war, Elizabeth was asked to exercise her personal taste in the decoration and furnishing of one of the rooms of the Soroptimist Residential Club, Number 63 Bayswater Road. She died in 1966 but a picture of her standing in her lovely garden continues to hang on the wall in the entrance hallway at Number 63.

In 1952 the Federation, in conjunction with the Save the Children Fund, opened a club for children in a deprived area of London and named it Elizabeth House in recognition of the moving spirit that Elizabeth Hawes had given to the project.