The History of Soroptimists in India

The Beginnings of Soroptimist in Indian shores

These are somewhat hazy. Lack of archival material and the passing away of all of the founder members of the first club doesn’t help. It seems some of the original documents got severely damaged in a flood situation Mumbai(then Bombay) often experiences.

But it was in 1974 that Perin Bhiwandiwala, became the Founder President of the first Soroptimist Club in India. Perin, was educated in England and the first Indian female architect. It is surmised that while in England, she came to know of the organization. On her return she was able to gather a nucleus of enthusiastic women- all professionals and over several meetings and cups of tea the first club took shape.

Dorothy Mackenzie White represented SIGBI to Charter the first club SI Bombay North on the 2nd of September 1974. There were 17 members all in high positions both at work and in social circles.

Another chance meeting resulted in SI Calcutta coming together. There is an interesting story of a Calcutta lady Aroti Dutta being sick while in London. Her hostess cared for and when Aroti asked what she can do in return she responded- was start a club in your city. On her return Aroti held many meetings at her home enlightening those present with the philosophy of Soroptimists.

SI Calcutta was chartered on 27th October 1979 – With 23 members, and Jean Wishart from SIGBI presented the Charter to Aroti Dutta as Founder President and Laxmi Parasuram as the Secretary. Aroti Dutta played a constructive role and later was elected as the first NASI President in 1990.

Laxmi Parasuram of SI Calcutta, an enthusiastic academician was a natural mentor and took on the task. It took about 735 days for the professional women of the town to be enamoured by an organization with a difficult sounding name! Convinced they were, and in August 1987, SI Burdwan was born. SIGBI President Katharine Fussel presented the Charter to Santanwana Sen the Founder President and Amita Bhattacharya as Treasurer. 15 professional members mostly teachers and professors from women colleges joined as the founding members.

Founder President Aroti Dutta and founder member Chitra Ghosh initiated the formation of Project 5 -“O”in  Bratachari village in Joka, West Bengal. The project was adopted for different activities for women in the field of education and vocational training. 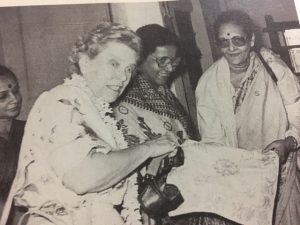 There was a move to start a National Association in India. Aroti, Antoinette D’costa, Chitra Ghosh, Sheela Rao and Laxmi worked hard on this. The first NASI Board took office in 1990.

Those were not the days of internet and cell phones. Sheela Rao remembers having to constantly be at the post office to mail documents to NASI board and to SIGBI Office.  Moreover, everything had to be hand written or typed and then photocopied! Despite that, Soroptimists took roots – a tad slowly though.

When Sheela Rao a member of Bombay North, relocate to Poona she met Gulshan Thukral from SI Jabalpur (now non-existence) who too had moved there. Together they were able to attract enough interested women fromdiverse professions to join. Mentoring was in constant supply from Sara Chandy of Bombay North and Antoinette D’Costa of the Bombay City Club. In April 1991, new Club SI Poona was chartered by Aroti Dutta, the first President of NASI, on behalf of SIGBI President -Jane Barrie. Gulshan took on as Founder President with Sheela as the Secretary.

SI Bombay North Club with missionary zeal sought to mentor more Clubs –Sara Chandy the Extension Officer of NASI motivated professional women in another apart of the large city of Bombay – and SI Bombay West came together. That was Sept 1992. Nalini Mudbkatkal was elected as Founder President and she is still participating in club activities. Some of the Founder members hold the club together.

Antoinette D’Costa President of the SI South Bombay (now non-existent) Club took on the role of being the mother club to another Club in the city SI Bombay Chembur. In November 1997 by Elizabeth Hughes from SIGBI flew in to charter the Club. The Founder President was Daphne Pillai.

SI Chennai – (then Madras) was mentored by Sara Chandy of SI Bombay North. Kamala Prasad a business woman of the city was motivated to start a club. With Kamala Prasad as the Founder President and 29 members the club was chartered on 14th Dec 1998 -. Kamala Prasad later went on the become the NASI President.

During her tenure as NASI President Kamala Prasad was able to Charter two Clubs.  Chennai Downtown was Chartered Sept 2002 and Gopi Narayanan installed as the Founder President. The membership of 25 composed of educators and business women, some who were already part of the city’s Chambers of Commerce. Kamala also started a Club in Hyderabad, which unfortunately closed down in a few years.

More Clubs sprouted in South India. Nalini Subbaiah, gathered 15 women coming from different professional backgrounds to form SI Bangalore. They found common interest in serving the society and belief in Soroptimist ideology. After working together successfully for a year they were chartered on 10th January 2004. Jackie Mosedale, the Extension Officer from SIGBI did the honours and Nalini became the Founder President.

Calcutta had become Kolkata by now. Laxmi Parasuram, of the Calcutta Club mentored once again a bunch of administrators, business women, doctors, educationists, executives, scientist and social workers. The outcome was SI South Kolkata. SIGBI President Ann Dawson came in with a group of SIGBI officials to present the charter on 21st September 2006. Bijli Mallik was the Founder President with 20 founding members.

Taking advantage of growing city of Poona-now Pune, six members of SI Poona moved to form club in another part of the city. With the advantage of already being familiar with the organization it took less than 11 months to get the Club going. SI Pune Metro East was chartered by SIGBI President -Jackie Mosedale on 31st January 2010

Founder President Nisha Ghosh received the Charter in the presence of SI President Hanne Jensbo, and 42 overseas Soroptimists. The 30 founding members were given the true taste of the international dimension of the organisation.

Madurai is an industrial city with a conservative community, but Naina Shah’s (of SI Chennai Downtown) persuasion, convinced some of them to think Soroptimist! NASI Extension Officer Annette Macarenhas chartered them on 14th September 2010, on behalf of the SIGBI President Jackie Mosedale. Anitha Rajarajan took on the mantle of Founder President and with 25 founding members were ready to introduce the organisation to their city.

Waiting in the wings was another club in Bangalore. With the concerted efforts and mentoring of Matilda Mathias, a member of Bangalore attracted the younger women- IT professionals of modern India. SI Chennai

Once again, an attempt was made to establish a Club in Hyderabad a city that had undergone a sea change in the past 10 years. NASI Extension Officer Rema Ramchandran (of SI Bangalore) worked tirelessly to get the club up and running. In November 2018 the Charter was formally handed to the Founder President Deepika Chalasani by NASI President Latha Krishnan on behalf of SIGBI President Susan Biggs. Megha Gupta the Secretary along with 32 members began a new chapter for Soroptimism in India.

Some Clubs were chartered but unfortunately for disparate reasons fell by the wayside.

NASI meanwhile plays a coordinating role between Clubs and the Federation.