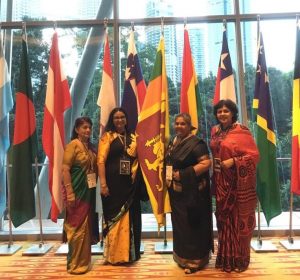 The formation of the Colombo club was due to the arrival there of Carmina de Livera, a member of the North London Club who had been requested to form a Club in Sri Lanka by Marion Collington, Federation President 1969-70.

Shortly afterwards Ruth Harris SIGBI President 1974 – 75 arrived in Colombo to help. Potential members met at the home of Olga de Livera in February 1973 and the Petition to form a Club was signed. The first meeting was held in March 1973 when Carmina de Livera was elected Charter President.

The highlight of the Club when in its infancy was the visit of Soroptimist International President Hilda Richardson to present the Charter.

From the beginning the Colombo Club concentrated a great deal of time and energy on service to the community, and its first project centred round children with mental health problems. Orphanages, hospitals and women’s prisons were also the concern of the club members.

A second Club in Sri Lanka, Colombo South was Chartered by President Margaret Hutchings on 29th July 1984 and later closed, leaving SI Colombo as the only club in Sri Lanka

The photo was taken at Soroptimist Interntional Convention In Kuala Lumpur, Malaysia in July 2019