Soroptimists in the Caribbean Network 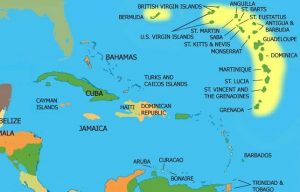 Federation President Dorothy Griffiths visited Trinidad and established the first club in the Caribbean –  Soroptimist International Port of Spain extension continued in this country and by 2018 there were 6 clubs. 2018 proved to be a great year for Soroptimists in Trinidad and 2 more clubs of dynamic and enthusiastic young members were formed  – visit Trinidad website for club information

A glimpse of the History of the Caribbean Regional Council

Soroptimist International Caribbean Network (SICN), formerly Caribbean Area Council, was formed in 1973.
In 1962 three new Clubs were charted in the Caribbean – To join the first Club – S.I. of Port of Spain. These Clubs were in three countries, two of which were fully independent – Trinidad and Tobago and Jamaica, the third country Barbados soon to enjoy full Independence. 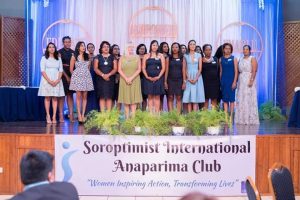 Notwithstanding the fact that the Political Federation of the British Islands in the Caribbean had just failed, there were a few Soroptimists who still believed in the concept of ‘Federation’ and started working on the possibilities of the Soroptimists in these three countries, soon to be four when the Club in Grenada was chartered in 1971.
At the Port of Spain Club 10th Anniversary celebration in June 1968, attended by Soroptimists from England, Jamaica, Barbados and Grenada, a Resolution was passed “that the Clubs in existence ….should seek to establish a strong Caribbean Association in which there would be a fusion of ideas and interests for the purpose of projecting the urgent needs and problems of the area”. 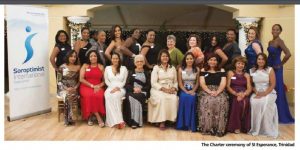 In consultation with Federation Officers, who were also enthused with the idea of having a grouping of Soroptimist Clubs in the Caribbean, steps were started to establish…. At a meeting held in Jamaica, in September 1973 … a Resolution was passed for the formation of the Caribbean Area Council. Dr. Kitty Henriques was elected the first President, Dr. Elise Robinson – Vice President, Cynthia Bertie – Extension Officer from Trinidad, the President Elect from Barbados, Dorothy LaCroix was appointed secretary and Nancy Mae Tapper, Treasurer.
Purpose: i) to unite the Soroptimist Clubs in the Area; ii) to promote the formation of new Clubs within its Territorial Area; iii) to act as a court of Appeal within the Area; iv) to promote the objects of Soroptimist; and v) to promote or provide a link with the government and other bodies.
Current countries: Anguilla, Barbados, Grenada, Jamaica, St. Vincent & the Grenadines, Trinidad & Tobago and Turks and Caicos.