During and after the First World War, woman had achieved greatness. However, the Second World War was to show them at their very best. The newly elected International Liaison Secretary Elizabeth Hawes said her main concern was to hold the three Soroptimist Federations together throughout WW11 but It was a difficult task –  to read more about Elizabeth Hawes click here

There is little doubt that in many countries it was the women who “battled on” to relieve suffering and hunger and perform tasks normally carried out by the men of their nations. 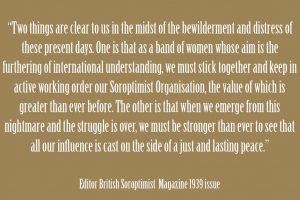 During this time, The British Federation assisted by Soroptimists in Europe embarked upon rescuing members of the Vienna Soroptimist Club and their families who were threatened by the Nazi regime. Over thirty refugees arrived in England from Vienna. British Soroptimists arranged their passage to a safe harbor in the United States where the brave and harassed women were helped by American Soroptimists. In addition, clubs in the American Federation generously gave gifts of money and clothing for distribution to stricken cities throughout Europe.

As war spread throughout Europe Clubs ceased to hold formal meetings, however many met clandestinely. To do this it was necessary  for members to gather in the home of one member just before blackout. The women would then spend the night busily making clothes, mending and preparing all manner of items needed by civilians and refugees. In the early hours of the following morning when the curfew lifted, the members would return to their homes, satisfied that their programme of service was able to continue 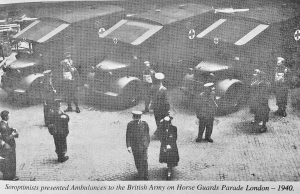 British Soroptimists continued to meet throughout the war years and to continue their service projects which included opening Rest Rooms for Women in the forces and organising Flag Days. In November 1939 an appeal was made to contribute to the purchase and outfitting of an ambulance for the British Army. Members in Canada also responded and three ambulances bearing the Soroptimist emblem, were presented to the British Army on Horse Guards Parade, London by the Federation President, two from the British Federation and one by the Soroptimists of Canada.

Some of the Soroptimists who assembled in London in May 1940 for the presentation of the ambulances. President Alice Williams is seen centre with the Quartermaster General, and at the back on the right, is the young Elizabeth Glen Dobie, then Vice President of her DU. She admits to being surprised that Dora Warner allowed her to wear her badge on the wrong side. She was a pharmacist in North Wirral at the time and two years later in 1942 took office as Federation President. Alice Williams, a Swansea Councillor, was wearing her MBE for the occasion.

Taken from “The History of Soroptimist International” by Janet Haywood 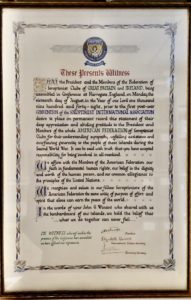 Thanks to SIA archivist for sending this image of the Witness Statement, which is held in pride of place at SIA Headquarters in Philadelphia.